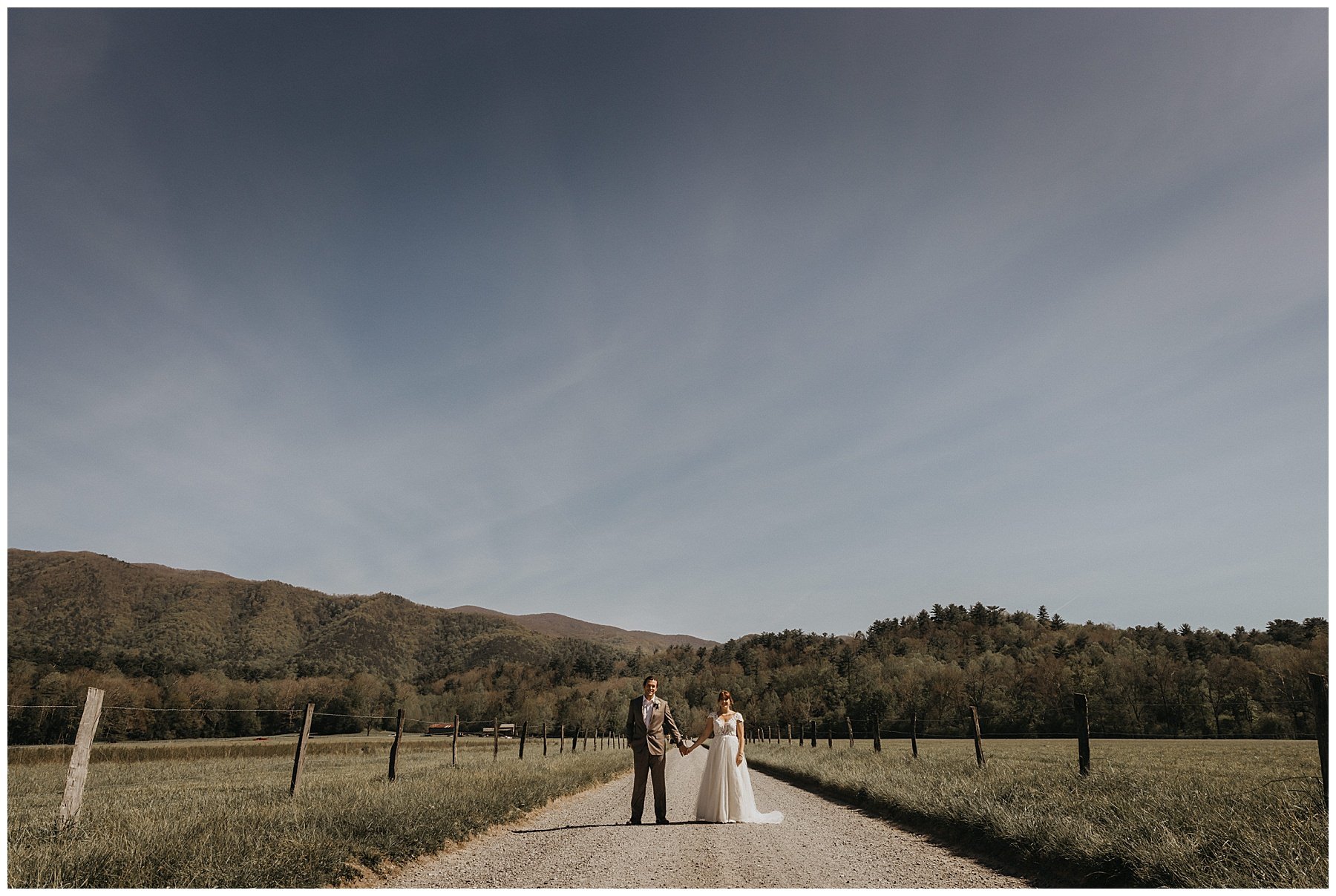 “I said a little prayer asking God if this was the right time for me to get married and to guide me. After I get out of the shower I go lay down in bed to rest for a little bit. Michael comes home and doesn’t tell me where he went so I got a little annoyed and just rolled over to go to sleep and he pops out a ring and asks me if I would marry him. I was so shocked and in disbelief, because just literally minutes earlier I had just prayed that prayer. I couldn’t believe it. And of course, said yes!”

I had the pleasure of shooting Christin and Michael’s Cades Cove Elopement this Spring!  It was such a beautiful day, and the bears were out en masse: I saw 6 that day! We met that morning and started making our way around the 11-mile loop, stopping periodically to shoot at some of the beautiful spots in the Cove. In the early afternoon, we arrived at the ceremony location: the Lequire Cemetary.  It took a little time for all of the family to arrive, but once they did, Christin and Michael were able to have a perfect ceremony with the mountains all around.

As always, I will let the photos do the talking.  Stay around till the end for the Couple’s Q&A… Date and venue of the elopement

How did y’all meet?

Michael and I met when I was 8 and him 9. My parents bought land and started building a house and Michael’s parents ended up buying the property behind us and built their house. We then became next-door neighbors. Our families had been interconnected beforehand because our parents also went to high school together. Our meeting and being neighbors was never planned and just ended up working out that way.

Growing up I was best friends with Michael’s sister which inevitably caused me to spend a lot of time with Michael growing up too. Once we turned 16 we knew that we loved each other. We never dated though and remained distant lovers from afar for many years. After years of separation and constant longing for each other we decided we couldn’t take it any longer and started dating. I lived in another town for 6 years before we got together. I dropped my whole life and moved back home to be with him.

We have always known that we were made for each other but waited for the right time to execute our relationship. It was worth the wait!

When and where did you go on your first date?

Tell me about your first date together?

Michael and I have so many years of quality time together that it’s hard to pinpoint a specific “date”. But sometimes we would meet up at the park and sit on the picnic tables and just talk about how much we missed and loved each other. We would often try to plan our near future.

How did you fall in love?

We fell in love when we were about 15 or 16. But it really started when I was about 12 or 13 and I was just young and obsessed. I would leave notes in his pillows and he would be like ewww lol. after we grew up and started to mature we really started to truly have feelings for each other and it only got stronger and grew even more.

One afternoon Michael had left the house and I went to take a shower. In my shower I said a little prayer asking God if this was the right time for me to get married and to guide me. After I got out of the shower I go lay down in bed to rest for a little bit. Michael comes home and doesn’t tell me where he went so I got a little annoyed and just rolled over to go to sleep and he pops out a ring and asks me if I would marry him.

I was so shocked and in disbelief, because just literally minutes earlier I had just prayed that prayer. I couldn’t believe it. And of course, said yes!

What were you most excited about for your wedding?

The Cades cove ceremony was technically our wedding and I loved everything about it. The mountains in the background were everything I wanted and having my family there (even tho they were so late) was something I was grateful for. It was magical and something we waited for a long time for.

Describe your relationship in 5 words

Where would y’all go for your dream honeymoon?

What is your most favorite thing about each other?

Christin: his heart of gold

How have you grown as a couple since you first started dating?

We have grown so much closer than we ever have. We have had a lot of bumps But we have grown to endure everything that’s tried to break us

Favorite quirk about each other

Christin say: his jokes and also Every morning pee he takes He farts during lol

How do you feel most loved by your partner?

Michael: when she kisses and hugs me at random times.

First impression of each other?

The ring is from Zales. Dress and shoes online. And flowers are from: From The Heart Flowers in Pigeon Forge, TN.

If you are interested in booking Hunter Kittrell Photography for your Engagement Session, Cade’s Cove Elopement, or Wedding Photos, Contact Me Here!

NOTE:  If you would like more info on eloping in Great Smokey Mountains National Park, feel free to contact me.  There are permits that you need to have your wedding in the park, as well as having your pictures taken in the park.  I can answer any of those questions for you.  Also, if you are planning on eloping, or need more info on eloping, check out my Ultimate Elopement Guide here.